New York, NY, December 9, 2019 — For the 25th year, CP Communications, a leader in innovative solutions and services for complex live event productions, managed end-to-end content acquisition for the TCS New York City Marathon. Now in its 49th year, the TCS New York City Marathon is the world’s largest marathon and the signature event of New York Road Runners (NYRR), the world’s premier community running organization. The race course begins in Staten Island and winds its way through Brooklyn, Queens and The Bronx before finishing in Manhattan in Central Park.

Over the past four years, as bandwidth and network availability have improved, CP Communications has gradually reduced its reliance on traditional RF technology to cover the race in favor of more cost-efficient IP and bonded cellular systems. CP Communications this year completed that transition, leveraging a 100-percent IP and bonded cellular networking infrastructure for live coverage of the Men’s and Women’s races across all five boroughs.

The company brought back many of the same platforms and technologies that have proved successful in recent years, while making strategic changes to the technical infrastructure and production workflows to ensure reliable coverage throughout the entire 26.2-mile course. Utilizing the expansive fiber network throughout NYC allowed CP Communications to increase flexibility at all locations, and further reduced reliance on traditional video transmission circuits. 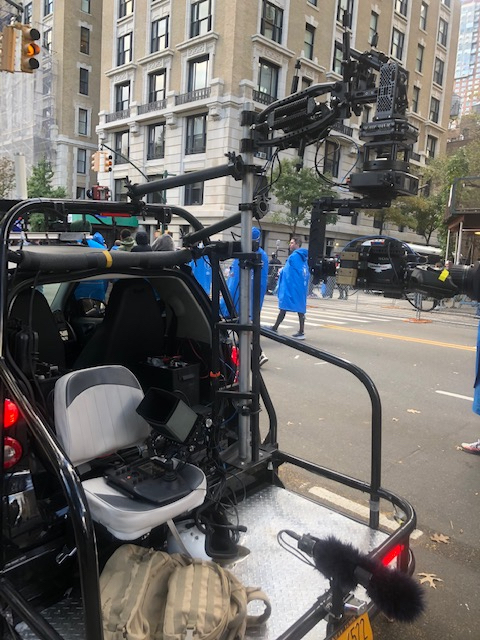 Four cars and three motorcycles were equipped with stabilized mounts and lenses, with an additional POV camera for talent installed on two of the cars. Mobile Viewpoint Agile Airlink encoders captured and streamed the live action via bonded cellular with bandwidth-efficient H.265/HEVC video encoding back to CP Communications HD-21 production truck, located at the finish line.

Agile Airlinks were also utilized on two rooftop locations in Brooklyn and Manhattan, and at three REMI (Remote Integration Model) production locations in Brooklyn, Manhattan and the Bronx. The rooftop sites also leveraged traditional microwave links as backup transmission for cellular-congested areas at the start and finish lines. The Agile Airlinks at the REMI sites captured live interviews with racers, NYRR spokespeople and other subjects over the course of the day.

For the first time, CP Communications added a Mobile Viewpoint 2K4 playout server at each rooftop and REMI site, allowing technical personnel to route any signal between any of those five locations. The same technology was added to each vehicle, which CP Communications Technical Manager Frank Rafka describes as an important first for this event.

“Having return video to the cars over the entire course was an important step forward, and overall we had a valuable return system to move video, audio and other signals between all of our acquisition points,” said Rafka. “This was one of the biggest changes to the infrastructure this year, as we could seamlessly monitor all locations and dynamically make changes as necessary — a major benefit of managing IP encoding in the cloud. The hotspots and cellular networks associated with Mobile Viewpoint technology made it very easy to achieve.”

Rafka added that the Mobile Viewpoint systems allowed CP Communications to send IFB return to each vehicle and REMI site. This enabled the team to communicate with talent seamlessly across all locations. Microphones were embedded locally at each site, which allowed all the audio to remain in lip sync with the video.

All video and audio signals were delivered from HD-21 to an NEP broadcast truck at the finish line using a MultiDyne VF-9000 fiber transmission system. On board HD-21, CP Communications personnel monitored bitrates and dataflow from all Agile Airlink devices, as well as signals leaving the truck through its 24×24 routing infrastructure. NEP produced world feed uplinks as well the domestic national broadcast for ESPN2.

CP Communications CEO Kurt Heitmann noted that his team wrote software to interpret data and GPS locations from 28 inbound signals to HD-21, which, when transposed over a Google map, provided valuable information as the race moved into areas and zones with more challenging cellular coverage.

“These technologies and workflows, along with overall better network bandwidth and availability, made it possible to leverage a 100-percent modern network infrastructure to cover this year’s event,” said Heitmann. “Collectively, we continue to push the envelope using traditional technology mixed with secure, reliable and cost-efficient IP and bonded cellular systems.”

Click below for the links to recent press of this great event!